Travel to Brazil – Where to go? 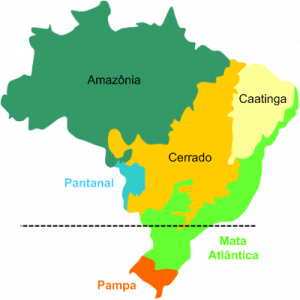 With a size of 8,5 million sqkm, Brazil is one of the largest countries in the world. It is about twice as big as Europe (European Union) and in order to know all of it, a lifetime might not be enough.

I once met a journalist who spent three years of his life to visit and film all of Brazil`s national parks, an area which represents less than 5% of Brazil’ territory. Since more than ten years, I am personally exploring the rainforest trails in South and Southeast Brazil and sometimes wondering how many of them exist and how long it can take to come back to the same place.

Who already had the opportunity to travel between São Paulo and Rio de Janeiro, a section which looks minuscule on every Brazil map, will agree with me that 10 days  is not too much, in order to explore at least some of the treasures that lie between those two metropolitan areas.

So, when you pretend  to visit Brazil with a limited time, it may be wise to pre-select some destinations, before travelling. To do so, you may divide Brazil in regions, states, municiples and cities but as a traveller or tourist, a better approach might be, to divide and to understand Brazil in form of biomes.

You can select between the tropical Caatinga desert in the northeast, the Cerrado savannah and the Pantanal floodlands in the center west, the Pampa grassland in the south and two rainforest biomes; the Amazon and the Atlantic Rainforest / (Mata Atlântica). All of these biomes are flat with the exception of the Atlantic Rainforest, where the Mar / Mantiqueira mountain chains expose mountains of up to 3.000 height meters to the tourist.

Since 2007, independent author, photographer and tour guide in Brazil`s Atlantic Rainforest / (Mata Atlântica).
View all posts by Frank Segieth →
This entry was posted in Brazil and tagged biomes, brazil, brazil travel, travel, where to go. Bookmark the permalink.